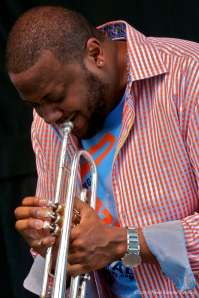 Reigning as one of the premiere trumpeters of our time with Roy Hargrove and Terence Blanchard, Jones’ new album “im•pro•vise; Never Before Seen” continues to delight in Jones’ ongoing efforts to mine the roots of jazz as well as adding new flavor. This is Jones’ tenth anniversary and seventh album with Mack Avenue Records, Inc.   Jones views this album as ” reintroduction of who I am.” And it is quite a reintroduction as he moves away from playing with the Jazz at Lincoln Center Orchestra.

Whether he was playing with Jazz at the Lincoln Center Orchestra as the lead trumpeter or mesmerizing his audience with a solo at the Detroit Jazz Festival, Sean Jones is sure to take you on a journey.  Trumpeter, educator, composer, and band leader –sometimes dubbed the hardest working trumpeter in the business–Jones invites you to his virtuosity and technical capability.

From jazz standard “How High the Moon” with is slower, accessible tempo to five tunes composed by Jones, the album demonstrates Jones’ ability to add flavor and layers to the standards while presenting his own style.

There are six compositions by Jones on this album, beginning with the opening track, “60th and Broadway.” This composition cajoles the ear with drummer Obed Calvaire and Jones  playing off each other’s energy in a synchronized composition by Jones; it is his “nod to all the great years that [he] spent at the Lincoln Center.” This tune attests to the energy that Jones sought to capture by recording live rather than dubbing. And recording live provides an opportunity for not only magical engagements among the musicians but it also  increases the likelihood of improvisation.

Another Jones composition, “Dark Times,” which he wrote more than 10 years ago, is hauntingly reminiscent of the timbre and tone of Terence Blanchard’s “Robin’s Choice.” According to Jones, “Dark Times” represents “a time of struggle and uncertainty,” both of which are always compounded or eased by choice. The remaining tunes conjure up not only Jones’ virtuosity but also the depth to which he can re-cast a jazz standard for a new generation, for example, in “How High the Moon.” Jones’ muted sound and ample spacing in his phrasing allows pianist Orrin Evans to shoulder and fall away from the notes just enough for Curtis’ light touch to caress the listener.

What makes Jones’ a favored trumpeter of many jazz listeners, as evidenced by the standing ovations that he gets in live performances, is his crisp playing and technical precision. This is never more evident than in the ballad, “We’ll Meet Under the Stars”: a nuanced and textured piece that once again highlights the synthesis between Jones and Evans. Both musicians slide into the empty spaces, as Evans overlays Jones’ sustained notes with a melodic tingling like crystal: sharp, beautiful, and clear.

On “New Journey,” Calvaire opens with an up tempo bossa nova-like rhythm that catches the ear and provides a foundation for Jones’ punctuated and precisely articulated notes, playing full range and register. And it is off to the races as Jones demonstrates the delight that he gets from recording live. The playfulness in this tune is evident, and its new journey could have very well been the opening cut on this CD.

Jones’ decision to get in the studio with his longtime band mates pianist, Evans; bassist, Luques Curtis; and drummer, Calvaire attests to the efficacy of jazz quartets, artistry, and labels like Mack Avenue Records, which has provided Jones with the support to continue to expand and grow, and to follow his artistic vision. It is with some disappointment that the engineering makes it challenging to hear Curtis. Perhaps this will be remedied in future recordings. Let’s hope that this quartet has plans to record and continue to delight us with their energy, precision, and tightness and Jones’ desire to do it “old school”: musicians in a studio recording live. Click here to sample Jones’ new CD “im•pro•vise; Never Before Seen.”